Why I wanted to take a gap year
I was a competitive runner throughout my high school and college education, meaning that international travel had been all but impossible for many years. This was due to both training and competition. So once my athletics career was at an end, my first priority was to finally gain some experience of travelling and volunteering abroad. 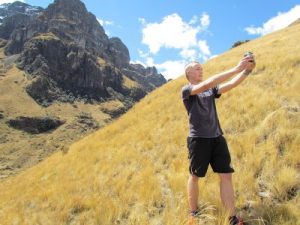 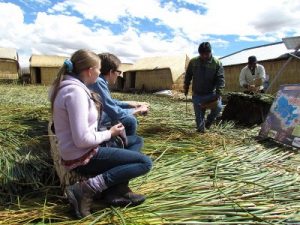 How I found my project
I came across Projects Abroad through a simple web search and was immediately struck by the tremendous variety and personal touches evident in all of their projects. I speak Spanish and love football and was looking to start at short notice. So Projects Abroad’s opportunity in Peru was the perfect fit.

The story of my gap year
Upon arrival at Cusco airport, a car from Projects Abroad was waiting for me. Along with another volunteer, I was taken to Calca in the Ssacred Vvalley, where I met my host family who soon treated me as one of their own. I quickly became my host dad’s right-hand man when it came to painting the house, fixing his car and much more besides. He was a key member of a local political party contesting upcoming elections, and a particular cultural highlight was marching in a political parade for Inka Pachacuteq whilst carrying a huge flag. I also had many rewarding conversations with my host family over dinner, which was much better than talking to friends via the internet. Being this open was the right approach, as it brought me closer to my host family. 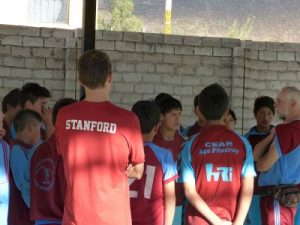 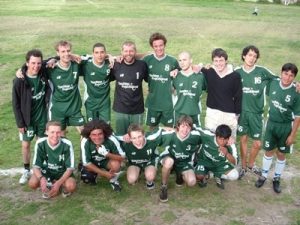 Concerning the project itself, my background gave me the unique opportunity to train daily with the high level academy kids aged 13 to 16. I didn’t lose a footrace to any of them during my time there, even though I’m not the best footballer. The head coach gave me tremendous freedom to organise and implement the fitness training in my own way. I often ended up running for nearly two hours each practice as the different groups rotated to train with me. When the academy kids were away, I also had the opportunity to work with the city chapter of Apu in the heart of Cusco. In both cases, the children were competitive, focused, and eager to learn. An example of this was the academy players reaching the final of the Peruvian club football tournament for under-16s. I could not have asked for better.

The support from my gap year organisation
In this respect, I could not have been happier. In addition to the Projects Abroad web portal, I could speak with somebody almost any time if I had any questions or concerns. It was easy to tell that the people on the other end of the phone had as much passion about getting me to Peru as I had about travelling there myself. The support didn’t end once I was on the plane. Whilst in Peru, I had regular meet-ups with staff to discuss how things were going. Projects Abroad were also extremely good at disseminating relevant information to staff and volunteers alike. Their Peru office, which was centrally located in Urumbamba, was easy to reach and always open if I wanted to drop in.

My advice to others thinking of taking a gap year
Go for it, even if it’s your first time abroad, as it was for me. I’d been nearly everywhere in my own country. But for someone with aspirations of working internationally, it was a new chapter in my life and I left Peru knowing that this was a realistic ambition.

After returning from Peru, Tyler worked for two years in Washington D.C. in association with Major League Baseball.  He’s about to begin graduate studies at Mannheim University in the School of Law and Economics, where he also hopes to pursue an MBA.